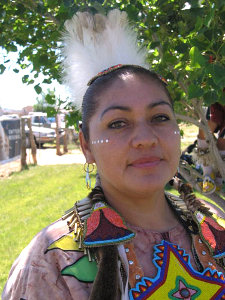 Shanan (Shanandoah) Martineau is a Southern Paiute from the Shivwits band.

Since 1998, Shanan and her sister Carmen Martineau have both become friends, after they shared a few weeks of their family Powwow travels with me and my camera.

I filmed and recorded interviews of their father, the late Lavan Martineau, who turned out to be very knowledgeable on the Indian petroglyphs and their Northern Paiute culture.

My documentary A RED APPLE INSIDE OUT recounts these precious moments shared with Lavan and his family.  In that film, there are several moments where Shanan and Carmen sing traditional Paiute songs and play the flute.

INDIANS LIKE US features a few tunes from Shanan’s album Little Sun in the Blue Sky, named after her first son Little Sun.

You can hear Shanan’s tunes and purchase her music on this link:  https://itunes.apple.com/us/album/little-sun-in-the-blue-sky/id266523494