Non-profit association, based in the small village of SAVY, the group SAVY WESTERN travels not only in their Northeast French region of Picardie, but also throughout France, Belgium, and Germany.

Alain Letellier, founder of SAVY WESTERN , also called "the chief",  has been leading this group since its creation over 15 years ago, learning  Indian songs, and making all kinds of Indian outfits and objects. 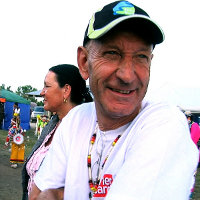 "4 years later, the ceremony, offered by Dennis in Wounded Knee remains full of emotions. We could see previously, during our visit of the Badlands with him, how the Native people were still subject to discrimination from the Police Authorities.

Sharing an intertribal dance was a most memorable moment for me.

On the day of our departure from the US,  Steve, an artisan who befriended Pascal at the Ethete powwow, came to greet us, and proposed me to go hunting and fishing if I ever came back. So that would be a great joy If I could afford it, but for now it is still just another dream.." 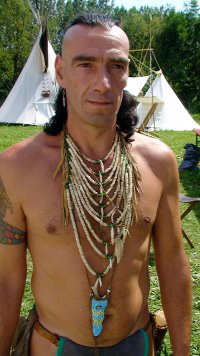 "I have always loved Indians, despite the television movies presenting them as mean and savage people. I like their respect for nature and the animals.

A few years ago I joined the association Savy Western and I do with them what I love the most: to raise my tipi and to dress in my self-made Indian outfits.

Some people say that we steal their culture ! Me, I don't pretend to be Indian, I respect them and I explain to everyone I meet, that many of them still exist but are in reservations.

It was always my dream to go to America, and thanks to Serge, who organized the trip, it became a reality and it was magical for me to discover part of the United States in campers. Now I dream to be able to live with them to get to know them better and exchange on a daily basis." 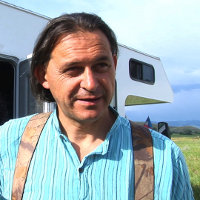 "Why did I go there ?
Certainly to bridge the gap between all that I had read and the reality inside and outside the reservations.

I just feel that these Nations have survived to show us the road to follow tomorrow, but shall we understand them..."