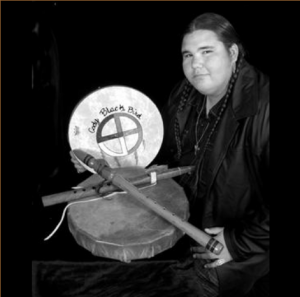 Cody Sun Bear Blackbird is a talented flutist and a rising star on the traditional Native American music scene.  Recognized as 2011’s “Flutist of the Year” by the Native American Music Awards, Cody is a Tribal mix of Eastern Band Cherokee and Dakota.  He has released four albums to date.

Cody uses flute songs to experiment with new musical stylings.  He collaborated with Frank Waln (Rosebud Sioux) of Nake Nula Waun on their song, “HEAR MY CRY” which was nominated for Best Hip-Hop Song at the Indian Summer Music Awards.

I met Cody at the Northern Arapaho powwow in Ethete, while I was shooting INDIANS LIKE US.  He was selling his CDs of Native music and proposed that I add some songs to my documentary.  Several tunes from his CD Coming Home are featured in INDIANS LIKE US.
You can hear and purchase Cody’s music here:  http://www.reverbnation.com/codyblackbird1